2012 is already kicking 2011’s ass, but that isn’t really saying all that much since 2011 pretty much sucked balls. The thing is, even though I was laid off and stressed out and had my heart broken, there were some unexpectedly amazing things that happened last year too. I stumbled upon what might turn into a real career for me. I absolutely love my job right now. The days fly by and I’m so busy I forget to eat and work evenings and most weekends and go in early.

And I love it.

I’ve never understood people who did that before but now I get it. They actually like what they do! When I first got laid off, the only person who said anything that made me feel better was my sister. She told me that several of her friends had been laid off and it was horrible for about a year or so but that every single one of them was happier now then they had been. And that is absolutely 100% true for me too. I never ever ever would have even thought about working in politics and I’ve always thought that people who did were all assholes. Oh, they are there alright, but there are also people working to actually make a difference in the world too. Maybe I’m just too new to be jaded, but I think new is exactly what we need in politics.

Last year I also met a man who was only in my life for nine months. But he showed me that there are still some good guys out there. And even though right now the thought of him dating some Missouri whore makes me want to puke, I am glad I met him. He made me laugh and reminded me that I don’t have to settle for someone just because I want to be in a relationship. Because when you have a connection with someone it is amazing but when there is no spark, it’s not really worth it. We got to take an awesome road trip together, I got to see where he belongs and I can move on knowing that he is happy and I am happy for him. Obviously, I’m sad that he is not going to be in my life more, but I got to meet a great guy and left him knowing that if I ever need to talk to him I can pick up the phone. And that’s a lot more than I can say about most of my past relationships.

I also met some really great people last year. There is no way in hell I would have hung out with a bunch of 23-year olds if I hadn’t been forced to take an entry level job. At first I felt incredibly old working with them. But I think they actually reminded me how to have fun again. I was definitely in a bit of a rut before I got laid off. Working in a job I didn’t enjoy and playing it safe because I wasn’t a kid anymore and had to get serious. It was humbling to start over again and it was terrifying to take a series of jobs that paid crap and were only temporary in hopes of landing something better. Not knowing where I was going to be in four months was new ground but I think it mellowed me out a bit.

This year, I still don’t know where I’ll be in six months. The difference is, now I am okay with that. Hopefully I’ve gotten through the worst of it and things are only going to keep getting better. 2011 taught me that life doesn’t always turn out the way you expect it to. That sounds really cliche and maybe it is, but I don’t know how else to say it. Even my lowest points weren’t all bad and even though pretty much nothing went the way I thought it was going to, I think I am better for it. I feel like I learned a lot and I hope that I am right about the direction I am going. But if not, I know I will be able to handle change better because I’ve already had to go through it once. 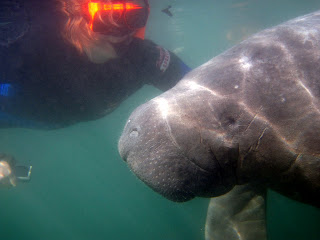 Unemployment is pretty awesome. Unless I start thinking about money and then I want to cry. You'd think I have plenty of time to blog without a job, but I just haven't been able to motivate. I am so incredibly ready to get back to work. But I think I have been enjoying my time off. I took a road trip down to Kansas City, I've had time to hang out with my family a lot, AND I got to swim with manatees. Yeah, it was as awesome as it sounds. Up next, one last trip to KC for Christmas and then back to Alaska where I finally get to start working again.
Posted by Kritkrat at 5:05 PM 1 comment:

I think I am a decent person. Sure I occasionally lie and I took some pens from my last job, but who hasn’t done that? And maybe I drink too much and perhaps I’ve been smoking lately but my destructive behaviors really only affect me. I’m sure everyone thinks of themselves as a good person. Even Jeffrey Dahmer probably thought he was somehow doing a good thing by hacking people up and keeping them in his refrigerator. But I put spiders outside instead of killing them. And even though I have been looking for a job all year, when I interviewed for a position that was right up my roommate’s alley, I told them she would be a better fit, which resulted in her getting the job. I volunteer. I try not to be mean, I hang out with people I don’t even really like sometimes because they seem lonely. When I have disposable income I donate money to charity. I hold doors open and I try to be polite.

So why is karma being such a bitch to me this year? Seriously.

It’s been almost a year since I got laid off. I am trying to stay optimistic because I know it could be a lot worse but right now I am substitute teaching for the fall. That is fun. And by fun I mean horrible. Money wise, things are getting semi-scary and subbing really doesn’t pay very well. But at least it’s marginally better than unemployment. And my roommate, the one that landed the job I told her about, just informed me that she is moving about because she ‘needs a cat right now.’ I was hoping to persuade her to stay until January because it’s a lot easier to find a roommate that time of year but she can’t wait 10 extra weeks for a cat. Because God knows, cats are hard to come by.

And to top it all off, the guy I have been dating and totally falling for during the last six months just told me that he is moving to Kansas City. In a month. I haven’t liked a guy this much in literally years. And after a minor freak out on my part right at the beginning, which I blame on the fact that I haven’t been so into someone for so damn long and it sort of scared the crap out of me, things have been going about as close to perfect as I’ve ever gotten in a relationship. Ever. But he got a really great job offer in fucking Missouri and apparently it’s too good to pass up.

I must have been a huge asshole in my past life.

I know I haven't blogged in forever. Honestly, there isn't much going on right now and I haven't been feeling like it. You're bummed, I know. The only things I have to talk about right now are:
1. I just found out I am going to be an aunt. FINALLY. It is going to be a bit difficult to win the Best Aunt Evah Award living 3,000 miles away from the new arrival, but I will figure out a way. I'm counting on the fact that we might end up sharing a birthday. My sister is due the week before my birthday, but since babies are never on time, well, sometimes, I am going to have a little chat with this one and try to arrange a duel birthday for us.
2. Harry Potter is finished. I saw it in 3D and regular D. It was my first 3D experience and I have to say, I'm not a fan. I hope this is just a craze and we can all go back to normal soon.
3. I ran into this guy yesterday. I was a bit closer than I would have liked, but he seemed pretty happy with this fish so I wasn't too worried. Living here never gets old. 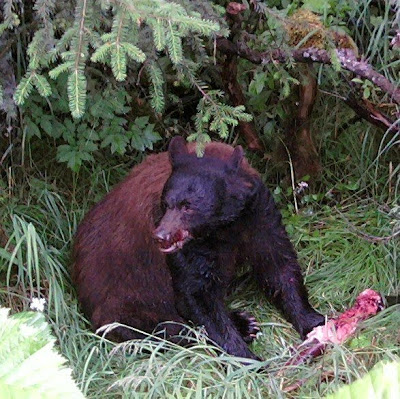 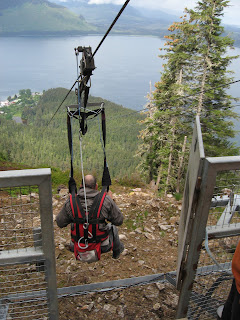 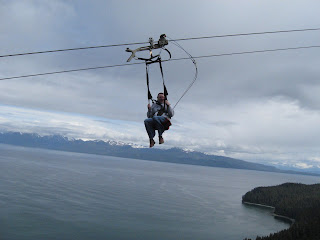 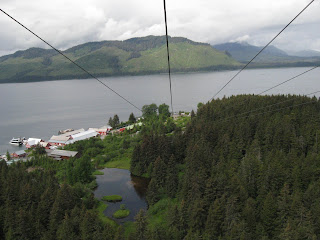 I went with a bunch of friends to Hoonah last weekend. They have the longest zip line in North America - over a mile long. I don't really get scared at things like zip lines. I've been sky diving before and that definitely was more nerve-wracking. But just because you aren't afraid to do something doesn't make it any less fun.
Posted by Kritkrat at 4:35 PM 4 comments: